Turmeric. Why should everyone include it in their diet?

Turmeric is an anti-inflammatory natural?

Turmeric is a species of turmeric and has been cultivated for over 200 years. This plantfrom India, processed and powdered, it becomes a spice not missing from people’s kitchens. Compared to other spices, turmeric helps prevention of serious diseases, including chronic inflammation.

What are the benefits of turmeric?

Turmeric has several important benefits for the brain. Stimulates the process of multiplication of neurons, becoming a significant ally against brain diseases.
The consumption of turmeric has a number of beneficial effects on our body, thanks a substance called curcumin. What is the role of curcumin? Curcumin not only prevents diseases but it is also an important ally in supporting the immune system. In addition, it helps treating stomach problems, improves digestion and lowers blood cholesterol levels.

Curcumin is also known for its anti-inflammatory and antioxidant effects. Antioxidants have the role of neutralizing free radicals, which are harmful to the body. Chronic inflammation attacks body tissues, and turmeric is the best choice to prevent this diseases because it is non-toxic, unlike medicines containing phenylbutazone and hydrocortisone. These can have adverse effects on the body. 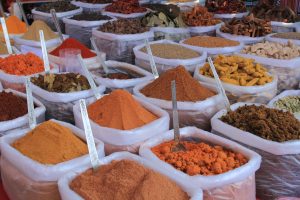 Although there is no cure for Alzheimer’s disease, it can be prevented by consumption of turmeric. Here comes curcumin, the substance that can remove amyloid plaques, whose appearance leads to the birth of this disease. If turmeric consumption already has a number of benefits in preventing Alzheimer’s, then can it protect us from a stroke? The answer is yes, and more than that therefore, turmeric prevents the appearance of atherosclerosis and can protect us from a heart attack.

If you’re wondering how we can consume more turmeric, now that we’ve seen what the effects are has the benefit, then the most handy solution is the curry mixture. Portion of Curry of lentils and spinach, from the Samsara menu can be ordered here: https://www.samsaradelivery.ro/ro.
Curry is a range of ingredients specific to Asian cuisines. Some of the spices of this mixture are: ginger, coriander, cumin, cinnamon, salt, hot peppers, but the most important ingredient in curry is turmeric.

Turmeric can be eaten fresh, but also pickled. Moreover, it is also a food coloring, being sometimes a good substitute for saffron. The use of turmeric is not limited to In many countries it is also used in medicine, especially in traditional China.

This website uses cookies to improve your experience while you navigate through the website. Out of these, the cookies that are categorized as necessary are stored on your browser as they are essential for the working of basic functionalities of the website. We also use third-party cookies that help us analyze and understand how you use this website. These cookies will be stored in your browser only with your consent. You also have the option to opt-out of these cookies. But opting out of some of these cookies may affect your browsing experience.
Necessary Always Enabled

Any cookies that may not be particularly necessary for the website to function and is used specifically to collect user personal data via analytics, ads, other embedded contents are termed as non-necessary cookies. It is mandatory to procure user consent prior to running these cookies on your website.